The morning after a show for a vendor is usually slow moving and tired. So, it is with complete amazement I have the mind set or energy to write up this review at 8:31 AM the day after the Hamilton Co Fairgrounds show. But, it is with the same energy and excitement that kept me going yesterday that wakes me to this, now. I’m elated by the success of yesterday’s show, in fact, I had trouble sleeping last night, my mind wouldn’t quit reliving the good times! 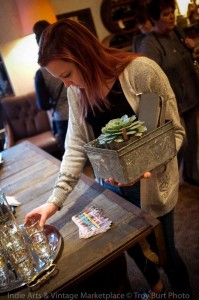 Overall, we saw a similar frequency of customers, with less crowding, the venue was well suited to our thing, which seemed to really put everyone on the shopping spirit! Lots of people we’re carrying away awesome stuff with big smiles. Everyone was talking and laughing, dare I say bragging, even most of the kids I encountered we’re not that upset their parents had dragged them along. In fact, two kids (future vendors) about the age of 10 bought a couple things from me, WWI army helmet and pocket knife, that reminded me of myself at that age and made me glad the young folks still show interest! They didn’t negotiate though, older folks, work on that!

What really has me up and going though was the stuff I was seeing, more so the stuff I missed. Amazing, wonderful stuff that I had neither the time to buy (I was working) and only saw because someone was carrying it away. I should note here that vendors are collectors who just have too much stuff. So, we look longingly at the lovely things our customers buy. We want them too, trust us, and it happens to make us very good at what we do. 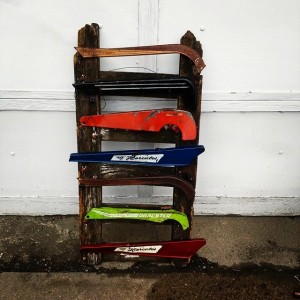 What I’m really thinking about this morning after, though, was that sign I missed that I should have bought when I saw it, that you didn’t likely see. There were lots of treasures like that, so what not a better review than to brag about (bragging has a lot to do with our thing) five things I saw that you probably didn’t. Why, would I be so crass and vain to write such a thing, you may ask? Because, as a collector and vendor with experience and an “eye”, I usually can pick out some truly awesome stuff most people don’t see. And, let me note, sometimes this will be items, stuff, inventory, or even people or an experience.

So here it is, your first “5 Amazing Things I Saw That You Missed (And Deal of the Show)!” in the form of a show review! I really want you to feel like you missed it, if you missed it, and miss it if you were there!

Old Window with Chicken Wire, with the Little Clothes Pins 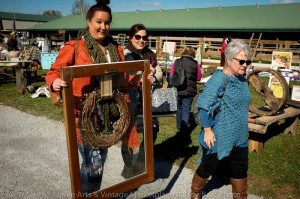 Okay, so this is probably the worst one to start with because I’m sure everyone saw these. What you didn’t probably see was the cool and unique ways vendors were decorating and displaying them. For example, did you happen to see those little tiny clothespins pinched all over that one? I saw several windows most of which were decorated with unique and trend setting items. These windows are becoming more and more popular at the shows and I highly suggest you jump on one, they are cool and they always sell first. 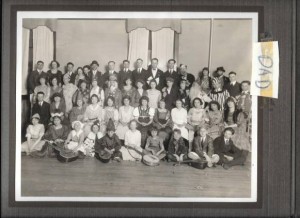 Photo history, the collecting of old photographs is something I truly love and not too many people recognize. Glen understands this though, which is why I throw my money in heaves nearly wounding him each time in order to buy his photographs. And, it’s not surprising that I found this photo (among others). I feature it because I know you didn’t see it, should have seen it, and it’s such an important piece because it’s stuff like this that makes these shows so special, hidden treasure! A note about collecting old photographs, content matters. No one (in photo-collecting Nerdville) cares about the standard portrait, unless it’s family directly related to you. We (the kindly folks of Nerdville) like photos with character, day in the life stuff. And, while this representation is a standard, group photo, who cares? I do because look at those costumes! And, the instruments at their feet! There is a story here and just based on this image I could almost tell it. Sadly, there’s no writing on the back. But, I’m almost certain I know what’s going on, do you? 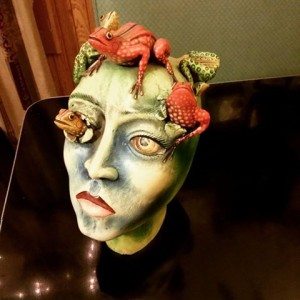 This one is borderline breaking the laws of what I can list in my own listing thing because I bought it before anyone could see it and showed it to one, not giving anyone the chance to truly find it. But, since I make the rules I can break them (with consequences, rest assured, there will be consequences *squints eyes at self*).

Why does this handsome young man dare brave yon peril? You ask? Because it again represents the type and quality of wares our vendors bring to these events, each time. Plus, I really want you to feel the burn about the stuff you missed. This piece, in my opinion, is definitely one to brag about. Know this though, if you went to the Nashville show you had the opportunity to buy it—4 days where you could have walked by it each day wishing you were wealthy enough to afford such fine, quality, unwholesome things. So, the fact that I bought it minute one of opening day really should be no consequence, but again, it wasn’t wholly fair. Sorry, but not really.

I chose this head, frog, to list here because it’s actually fine art. Made by Macias, it’s a delicate one of a kind piece that kind of shocked me to find, out anywhere really besides a gallery. And, it was bought at a fair (and firmly negotiated) price. Who would have thought you could buy a Macias at the Hamilton Co Fairgrounds? Me, ha-ha-ha!

I made the mistake of showing this to Troy as I negotiated with the vendor. It was leaning on the outside of a booth, out of sight and with a vendor that usually didn’t sell collectibles. And, given this was truly the deal of the day, the price was soo right, someone near and dear to Troy shared the same last name that was on the sign, which is one of the main reasons to buy an old sign, and I always like to place things where they truly belong, I was just going to resell it anyway. Sigh, even though, I still kick myself for being the good pal I am. It was an awesome sign! It better be hanging over your toilet like we discussed, Troy.

Invention of the Boot Lady Boot

Annie Kruse de Jongh of Grace and Corazon and Peddler (of boots and baubles) is a veteran vendor, so, you may ask, what’d I miss? The story behind this awesome gal and why you should patronize her and small business, in general—conversation oral history about the invention of these awesome boot, is what you missed! Ha!

It’s really a simple story, she was working or at a concert or something (there was a mirror close by and I was terribly distracted as she was telling the story, so details might be a little made up), and she was hot (it was summer), and was wearing these awful tall balmy cowboy boots. In order to cool herself, she elected to make possibly the most important decision in her life, cut them boots down, roll them over, and tie them off with a string to keep them down. And, being the fashion aficionado she is, colored in the designs on the reverse sides (folded over). Within in 4 footsteps of dawning this ground breaking design, (coincidentally the same amount of steps you take before succumbing to the poison of the deadly rare South African Striped Tailed Warple), the boots had been noticed in admiration, hence, the amazing folded down boot was born.

I truly suggest talking to the vendors. They are such interesting, kind, caring people who have such cool and varied experiences. Getting to know these people, for me, is just as endearing as loving their stuff! If you’re not chatting it up and being social, you’re truly missing half the experience!

Well that’s the great review! The big deal to make you feel like you missed it. Do you feel the burn? If not let me try one more time. Hoosier Sisters, not only did I score their fashionable, stylish one of a kind trucker style ball cap, but I fooled them into taking a picture with me! Ha, got them good! Whew! Just imagine if you were there, you too could have possibly experienced a similar great moment! But, not to worry, those fancy Hoosier Sisters will be there next time with their money stealing hats!

Thanks to all that came and we truly look forward to seeing you April 9th at the Indiana State Fairgrounds! Hope to see you there! 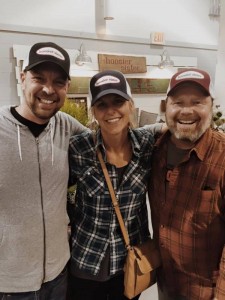 Just for the record, that’s your fabulous event photographer (and my BFF), the legendary Troy Burt! Thanks for the great images, pal!

Sign up today for free and be entered to win one of our monthly draws for a free season pass.

Enter your email below to get started!